Tin cans, can openers and solar power: explaining the snail’s pace of innovation

Innovation is fascinating. It brings us (by definition) all improvements in technology. Simultaneously, it proceeds at a snail’s pace. An example I love to share is the invention of the tin can, which was a breakthrough in food preservation (there were no refrigerators at the time, and tin cans allowed people to safely transport and store previously perishable goods).

Made practicable in the early 19th century, tin cans were sold bearing notices like “Cut round the top near the outer edge with a chisel and hammer”. And then.. it took over 50 years for the first home operable tin opener to arrive in 1870 (in the 1850s, an opener was available for use in stores, who would open your cans for you). The modern easy to use and safe opener was only invented in 1925.

Until the arrival of the opener we know today, opening tin cans was a dangerous exercise. In fact, it was a common cause of injuries and infections, highly dangerous before the advent of antibiotics. Yet it took decades before the problem was solved, even when the need for a solution stared people in the face!

This example is historical, and hard to come to grips with - why did no one invent the current can opener earlier? The mind boggles. Here’s a far more recent example and one that is still developing. It may help shed light on why innovation proceeds so slowly.

(It looks like this post is about how much I like solar, and while this might be the case, the point I’m trying to make is not that solar power is great. The point is to elaborate on why innovation operates so slowly, using a currently happening development. In fact, if you find yourself disagreeing with my description of the bright future of renewable energy, ponder where your disagreement is coming from. That very disagreement likely is what this post is about!)

Renewable energy sources have long been treated with derision. “What about when there’s no wind and no sunlight?”. Industry professionals and engineers alike shared this disdain, because as seen through their eyes, solar power compares very badly with (for example) a coal powered plant. The coal powered plant delivers energy against low prices (perhaps 3-7 eurocents/kWh), and does so continuously within a short few hours of turning it on, which you can do at any time you desire.

If you hold this next to solar power, photovoltaics do come off very poorly. They roughly operate in three modes - no output (night), 10% output (overcast) or 80-100% output (direct sunlight). One can try to predict when they’ll deliver this output, but you’ll never get it quite right. And, to add insult to injury, the production cost per kWh currently is a lot higher than coal powered plants! So not only don’t you know if and when you’ll get energy, you have to pay more for it too. A mostly similar story applies to wind power.

The upshot of the intermittent nature of availability is that by the time you’ve built enough solar and wind farms to cover your average needs, you’ll have generated vast overcapacity for when the sun shines and it is windy. Your capital costs meanwhile have also been huge compared to boring old power plants.

In short, from the viewpoint of the seasoned energy professional, solar and wind power makes for very unreliable expensive capacity that generates imbalance between power needs and power production. The professional then points out that energy storage (which could average out the imbalance) is prohibitively expensive, and won’t save the day. Repeat this story for decades and decades, and you are in 2008 or so.

Personally, I was fully on board with this line of thinking. I advocated the development of large fusion or even fission plants as the (remote) future.

Then, through various plans that weren’t too well thought out (I think), all of a sudden whole countries started building heavily subsidized wind farms and suddenly cheap roof-top solar panels at a massive clip. Germany comes to mind. The Netherlands and other countries are now following behind, even with dwindled subsidies.
How come? Well.. the original energy professionals were thinking entirely on the production side (and who can blame them, that’s where they worked!). The reality is that in many countries, no consumer actually pays anywhere near 3-7 (euro)cents/kWh for electrical power. Transport costs and heavy taxes increase actual ‘grid costs’ to over 20 eurocents/kWh in most parts of Europe.

And since producing energy you use yourself is untaxed, domestic energy users compare the production costs of solar against the delivery and taxed costs of grid power. And guess what, since there is a factor 3 to 6 between these numbers, all of a sudden ‘grid parity’ arrived. Unsubsidised solar energy is now cheaper than grid power in many places.

Note how the concept of grid parity, or at least the term, burst on the scene in January 2008 (the Wikipedia page was created in June of that year). Before that date, the old view of solar power as a sort of retarded coal fired plant prevailed. Production parity was what mattered. Grid parity, which is what matters for consumers, was not a factor. (By the way, I checked - the flatline of the graph pre-2008 is real, and does not reflect a lack of data).

Grid parity is when solar is interesting for consumers - production parity is only relevant to power producers.

What the staid electricity people thought unacceptable (and perhaps unimaginable) is now the new reality. The centralized generation of power has become an uneconomic and highly ungrateful enterprise to be in. If the sun shines and the wind blows, there is literally no need for the coal fired plant. Effective energy prices now routinely plummet to 0 cents, and have gone negative on occasion. 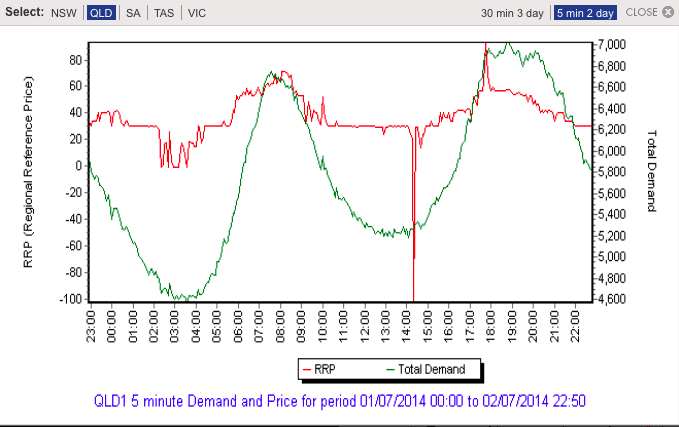 Note zero pricing around 03:00 and negative prices around 14:20 http://reneweconomy.com.au/wp-content/uploads/2014/07/aemo-solar-price.jpg

And while this is clearly unsustainable (nobody can generate power this way and stay in business), this reality isn’t going to go away, although some localities have so far succeeded in outlawing (Cyprus) or heavily taxing (Hawaii) grid connected solar panels.

The practical upshot though is that even today, substantially lower amounts of coal and gas are being shoveled into power plants.

Meanwhile, wily entrepreneurs have cottoned on the new reality of highly variable energy prices, and are scheduling their business needs around them. Processes that lose money at 20 cents/kWh make a lot more sense at 3 cents/kWh! This is the future, and attempting to emulate the flat power prices of the past century is not.

In another shocking development, a decade ago, California suffered from brownouts and even rolling blackouts, mostly on hot days when lots of air conditioners were running. Now it turns out that a lot of this can be blamed on energy fraud by Enron, but the problem of peak energy use was real. 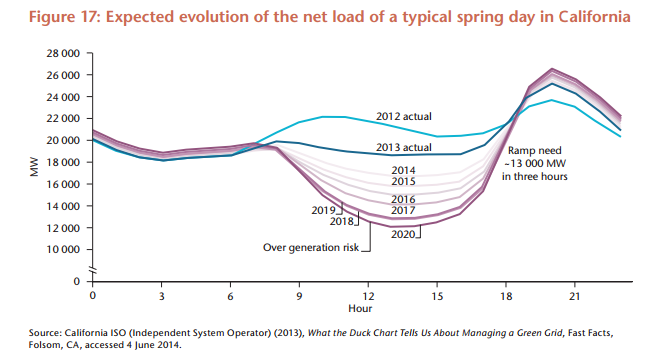 Welcome to the new reality - already in 2012 the peak was mostly gone, and in 2014 it will have become a dip. The new challenge is the ramp-up when the sun goes down. All of this because in 2012 photovoltaics met the concept of ‘grid parity’, a concept very rarely discussed before 2008.

Only now that minds have been liberated, new thinking has arrived. One could for example ponder potential mass adoption of electrical cars, cars that will need to be charged before their owners drive off with them, but conceivably could charge ‘on demand’ during the day. They could even deliver power during unexpected peak net-demand periods (!). Nearly free energy and “the internet of things” could make this a reality.

Lots of other things could happen too, for example electrical heating of houses currently heated by gas, electrical (on demand) heating of water reservoirs for residential use (‘peak shaving’), bulk energy storage centrally, regionally or even in homes, etc. It is a whole new world out there. How things will end up is hard to predict, but we can already be sure that everything will be cheaper and a lot friendlier to the environment. And this leaves undiscussed the geopolitical impact of a world far less reliant on oil and gas!

All this thinking was previously rejected out of hand, “because it did not act like a power plant we know”.

What this means for innovation

In hindsight, the commonly held belief that solar (or renewable energy in general) will never fly until it performs exactly like a traditional power plant was and is ludicrous. But you still hear it today. A lot. And when you hear it, ponder the decades it took to invent a reliable can opener. Innovation happens at a snail’s pace, and only appears obvious in hindsight.

This inability to see the beyond the present concepts appears to be a feature (bug?) of human nature.

If you are personally trying to innovate, read up on the history of previous inventions, and see how they were rejected by experts and professionals. Read on until you get a feel for proper rejection (“the flying car” with present day technology) and failure-of-the-imagination rejection (British Post Office comment on phones “no need, we have lots of messenger boys”).

To innovate, we must free yourselves of dearly held convictions and concepts. Ironically, the people with the most knowledge and thus the best credentials to invent the future tend to cling fastest to previously held concepts. This is the challenge of innovation - using the knowledge out there, but without having it hold us back.

Good luck!
(Thanks to Nicholas Miell, Tsjoi Tsim and Jan van Kranendonk for editing & constructive criticism - all mistakes remain mine!)